I love the cinema going experience. It’s one of my true pleasures in life. The red seats, the over-sized drinks, the smell and rustle of pop-corn and most of all the dark room with the big screen. I’m a man of simple pleasures and I sometimes feel that the quest for new, huge, shiny multiplexes has taken us away from the very experience that made attending the movies such an event.

That is why I am thankful that cinemas such as Screen on D’Olier Street in Dublin still exist. The theatre stands as a bastion of cinematic entertainment and one of those rare places that still captures the nostalgia and old emotion of attending the flicks. One of the things that makes this relatively small enterprise, in the heart of Dublin city centre, stand out is that despite the fact that it appears like a relic from a bygone past it is in fact Ireland’s very first digitally only art house cinema.

The Screen team have invested quite a substantial amount in order to bring the technology bang up to date but it is a welcome and noble effort. It offers a wonderful contrast of old and new that adds to the importance of the venue. And it is important. For Screen shows movies most are unlikely to see in the multiplexes, foreign films and cinematic artistry of determined majesty, the likes of which Hollywood could only wish to evoke in its big-budget brash and somewhat vulgar movies. Don’t get me wrong I enjoy the big-budget movies as much as the next man but they do not connect emotionally with an audience nor live long in the memory.

What Screen offers then is a chance to see movies that you won’t see else-where the way that they were mean to be experienced. One of my fondest cinema memories is of attending Screen during the Jameson Dublin International Film Festival in 2006 for a screen of The Civilization of Maxwell Bright. This movie was wonderful, an unknown gem and I was privileged enough to meet with its star Patrick Warburton that day. The man is better known for playing the Tick in the TV series of the same name as well as providing the voices for the Tick in the animated series and Joe Swanson on Family Guy. While that might not be a fair example I have had the ultimate pleasure of attending many other fine films there which I knew little about but which I knew would be interesting and arresting. My confidence in this stemmed and still stems from a deep trust in the knowledge and conviction of the Screen team who seek out movie from far afield and unknown origin but are powerful and epic examples of the medium. 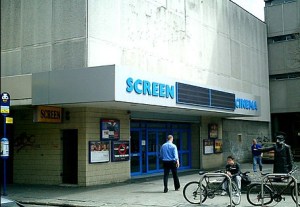 To coincide with their recent renovation Screen had a gala relaunch party last week. While unable to attend myself, due to being stationed outside Ireland’s fair isle, some of my friends and fellow contributors at Culch.ie did and by all accounts it was a star-studded affair and an event worthy of the surroundings. The relaunch aired the Gene Kelly and Fred Astaire classic Singin’ in the Rain and ushered in a new season of classic movies that will soon light up the silver screen once again. This marvellous new season will bring us the likes of Oklahoma!, Gentlemen Prefer Blondes, The Wizard of Oz, An American in Paris and Meet Me in St. Louis. Films that have stood the test of time but that many will never have seen the way that they were intended, in the dark, projected on that magic screen.

The first movie of the new classic season will be Singin’ in the Rain, which will unroll November 17th, a chance for all those who couldn’t attend the gala to catch this legendary performance. It will be followed every Tuesday from then until Christmas with more iconic movies. Hopefully interest in these will spur a second season as many classics deserve a cinema airing once again. For this and many other reason Screen cinema has my eternal thanks as a film-loving nut.

This entry was posted on Monday, November 16th, 2009 at 10:35 am and is filed under Movie Memories. You can follow any responses to this entry through the RSS 2.0 feed. You can leave a response, or trackback from your own site.